What’s the best way to discover Paris? In this grand city, there are a multitude of options available. It is surprising that, in a city largely constructed and planned centuries earlier, above ground transport is amazingly effective.

The rules seem to be more relaxed here than, say, in Australia. Particularly when it comes to motorbikes and bicycles, which often take liberty to run red lights when there is no traffic coming from the other direction. They also will park wherever they desire on the sidewalks, and then scoot through crowds of people to get back onto the roads.

Below ground, the Métro and the RER (Réseau Express Régional) function expectedly well. It bemuses me when somebody sprints to jump into a wagon because the next service will arrive in no more than three minutes.

I generally prefer to walk, however. Walking allows me to really get a sense of the local culture. Walk past a local café or restaurant, browse the stores. You can utilise all of your senses. Smell the cheeses as you walk past a fromagérie. Listen to the daily conversation as you walk past terraces packed with people. Simply put, getting myself lost in the city is better than knowing where I’m going.

There is one other option that I must admit I haven’t done much of during my travels. Cycling. Typically one has to purchase a bicycle for this and with that comes the issue of where to store it, etc. so I’ve never really given it a second thought. In Paris however, one has the option of taking the Velib’.

The Velib’ is a fantastic initiative where for a small price, people can use bikes provided to the city whenever they wish. The bikes remain locked in a station until a valid card scans across the bike’s docking station. Doing this unlocks the bike for use. One can then use this bike for no charge for a 45 minute session, at which point they will be charged for each following hour. Return the bike to any other Velib’ station before the 45 minute period finishes and you can wait a few minutes before just taking it again. Simple, yet so effective.

I’m not sure how one manages to obtain one of the passes necessary to unlock a bike but it mattered not for me. My current Couchsurfing host kindly gave me her Velib’ pass during my stay here so I decided to give it a shot. Due to the bikes being used around the clock by the general public, there are a few traps to look out for. It’s not uncommon to find bikes with either deflated tyres, faulty brakes or seats that aren’t tightly screwed down. It’s important to do a bit of testing before finally choosing and taking one. 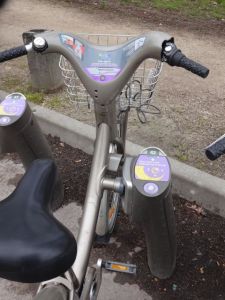 Once you’re off, the cycling is pretty easy. For one, the bikes are pretty good. They’re a bit on the heavy side, but they come complete with a carry basket and cycle pretty smoothly. The second point is that Paris makes it really easy to cycle, and for a number of reasons. There are loads of cycling paths to take, both through parks and through city roads. Streets that can barely fit a car’s width down them will still contain a dedicated bicycle lane.

Another reason is that the car driving demographic actually respect the cyclist here. This is in stark contrast to how it works in Australia. I admit to being slightly nervous before attempting to ride in the city limits. But not once did I actually feel in danger due to car traffic. The cars provided plenty of space, and remained patient until the right opportunity came to overtake.

There was never any stress trying to find another Velib’ station before the time period ran out, as they were abundant. Although I have to say that once you go outside of the arrondissements, past the Boulevard Périphérique, they become more and more scarce. Try to stay within the Périphérique when taking the Velib’.

At the end of the day, I had managed to cycle from Ivry-sur-Seine to Bagnolet, just taking whichever roads looked interesting to me. I cycled through the Bois de Vincennes, which was a great place to relax despite the cool weather. I was able to cover a much larger area in one day than had I have walked instead, and all while enjoying the same benefits as walking.

I certainly intend to continue using the Velib’ for as long as I can during my time in Paris. And would you believe it, there’s a similar initiative with electric cars, called Autolib’. I think I’ll stick to the bikes for now.