The southern part of Spain was once under Islamic rule. For this reason there exists many Alhambra or Alcazars throughout the major Spanish cities of the south. These are essentially former Islamic palaces where the rulers resided or fortresses of war.

Those existing in Sevilla and Málaga have already been documented on this blog but travel for some time through Spain and the people will almost certainly tell you about that which resides in Granada. The longer you wait, the larger the legend grows.

Perhaps not so surprisingly given the lack of research while traveling, this famed place had not been known to me prior to the word of mouth that had been received. Almost everybody had agreed that tickets had to be reserved a couple of days in advance so there was the real risk that my laissez faire traveling mentality might finally prove a downfall to me.

The Alhambra itself is (as most are in Spain) situated upon a hill to provide the best lookout. It is part of the city of Granada itself and can therefore be walked to and generally seen from anywhere in the town. But it’s the exploration of the interior of the Alhambra’s walls that has become so renowned.

I decided that reserving a ticket was a priority for me. Tickets can actually be reserved at some specially marked automatic teller machines here and I initially attempted this passage before being told by the machine that all tickets were sold out for the next three days. This only grew my curiosity for the place that I had not heard of previously.

My friend there told me that it’s possible to go to the site in the early hours of the morning – around five – and potentially find a ticket that way. I decided I would just go to the site and ask them about other possible avenues.

Another small win for the unorganised traveler.

And another such example of Spain’s untrustworthy technology.

So it was that I would be privileged with the chance to see this ancient site that had drawn so many people’s attention, and now mine with it.

The tickets were allocated for a specific hour, purely to try and keep the amount of visitors inside limited, which meant that I had to wait forty minutes or so. It allows access to the Alhambra and also the area known as the Generalife. This Generalife was the playground of the rulers, a place where they could relax in the gardens.

I decided to explore the Alhambra first. The initial part goes for one hundred and fifty metres or so and is pretty barren. Nothing seems to be any more impressive than the Alcazars seen in other towns. What’s more, there are barriers up preventing people from exploring all of the areas. There are even signs up prohibiting people from touching any of the plants or hedges that line the walk.

Eventually the path seems to lead the people to the exit. This comes across very confusing. Surely this isn’t it. I had a plan of the site and it seemed there should be much more to do than this. But there was nowhere else to go, as all the other paths were blocked off and prohibited. So I took the exit.

In reality it wasn’t an exit. Well it was, of sorts. Even to this day I’m confused. It took me out back to main roads that anyone can access. There were old houses there that were actually hotels. Follow the road down a bit and you find yourself at another entrance. The journey continues, but it was far from self explanatory and there was not much guidance to assist you there.

I arrive at one palace. There are loads of people here and I want to take the road less traveled to avoid them and do some more exploration. But when I do, it leads nowhere and there are security guards preventing access. This is beginning to feel like a forced route, where everyone must follow the same path at the same time. Not my ideal traveling method.

The palace was an old theatre, square in shape but containing a circular platform in the interior. It is quite impressive and provides the first glimpses of this place being quite impressive. But still nothing that would create such a fuss over this place. Why has it got the reputation it has? Is this going to be another Eiffel Tower? Where the legend is fuelled only by the reputation itself and not actually by it’s contents?

There is another section to the Alhambra, a series of palaces. For some reason the ticket allocates a separate time to be able to visit these, but it’s unclear if the time quoted on the ticket is the last time that you can enter or the first time that you can enter. No point asking the guard, she can’t speak English. This made a lot people clearly frustrated and I could sympathise with them somewhat.

This woman’s job is to interact with the tourists passing through and to help explain what the ticket provided them access to. The tourists. The Alhambra of Granada is a UNESCO World Heritage Site and thousands of people pass through each day. Surely, just surely they would expect non Spanish people to be visiting and require their staff to have a good level of English to accommodate them.

This epitomises much of the Spanish mentality that I’ve seen prior. They couldn’t care less about making things any easier for anyone else, even when it would profit their business. It all comes across as a big fuck you to anyone wishing to come into their country and not speak Spanish.

As a result it meant that the lineup of people waiting for entry to the palaces contained fifty percent of people who weren’t even allowed to come into the palace area at that time. They would wait thirty minutes or so in the line oblivious to it, only to find out when they finally arrive at the front of the line. The whole organisation of the site was in shambles and easily incited frustration.

I had two hours to waste before I was to be granted entry to this area so I decided to go back and explore the Generalife area. This was a nice area, without being anything extraordinary. This started to match levels seen by that in the Alcazabar of Sevilla. The gardens were nice, without being huge and the architecture of the buildings were typically Islamic and gorgeous. 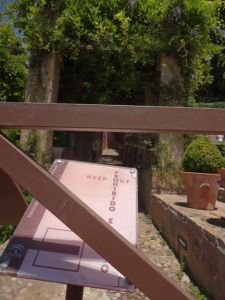 Who knows what’s up there?

Yet, the Generalife only cause further frustration as it highlighted another serious problem of the tour. So many places throughout – whether in the garden area or in a building – were sectioned off to the public, for reasons unknown. It really dampened the exploration feeling that I had come to expect after visiting the Alcazar of Málaga. This was not the same thing at all. They had organised a specifically designed path for everyone to follow and it really annoyed me.

It really went against the laid back Spanish attitude of anything goes. This is one of the things I enjoy most about the Spanish but here they’ve covered it up and shamefully prohibited it. There’s far too much paranoia of people damaging things here that simply didn’t exist at the other similar venues around Spain and really doesn’t need to exist.

The entire experience was really proving to be that the Alhambra and the Generalife of Granada was a huge sham. Sure, it was great to observe the historic buildings on offer but these were not any more impressive than those seen elsewhere in Spain.

At least it was finally the hour for me to be admitted to the palaces. These, as mentioned before, are a series of buildings that served as places of business, residence or simply relaxation for the leaders of the past. Walking through the first few courtyards and rooms and it was certainly impressive. More impressive, probably, than those seen in the other venues in Spain. This is why they had decided to quote a specific hour on the ticket for this section because it was clearly the best part and everybody would have rushed to here and stayed here for the duration of their stay. I couldn’t have blamed them, I would have done the same thing.

The walls were superbly detailed with finely chiseled patterns that amazed for hours. The amount of time that must have been put into creating these is astounding. As amazing as these buildings were, they couldn’t mask the frustrations that had already been encountered in the first part of the tour. I still didn’t feel it deserved to have the world class reputation and recognition that it did.

Remarkably, that was about to change.

I walk around a corner and out into the Patio de los Leones. Immediately, immediately, I understand why such a fuss has been created over this site in Granada. Why this Alhambra, above all, is the most renowned.

An outdoor court with a fountain in the center, the most impressive feature of this is the surrounding walls. The most detailed, fine patterns chiselled into them, the walls span a series of columns that support them with intricate arcs and splices. Impossible to describe, the patterns and architecture had me standing there mesmerised, so much so that I failed to see a small stream of water running from the fountain and stepped in it.

Inside the rooms that surround this marvel are patterned walls that continue its majestic nature. Domed ceilings that are also chiseled finely. Nothing here was taken lightly, and everything contained the most precise details.

And in that hour or so that I stayed in this court area, marvelling at it’s beauty, all had been forgiven. All had been forgotten. I cared not for the non English speaking staff or the barricades that blocked my exploration. The Alhambra had gifted me this sight, and I was not to resist falling under it’s spell and conceding to it’s brilliance.

Photographs rarely tell a story accurately but there are some scenes that are impossible to describe without seeing them through your own eyes. This is one of them and although I tried valiantly, the photographs that you will see don’t even incite ten percent of the emotions I felt at that time.

The Alhambra of Granada is something that requires time and patience to explore. But if you wait long enough, it will reward you greatly.